We are Joan Candalino, potter and tipi maker, and Tom Strode, blacksmith, known together as Sweetwater Tipi ®.

The first tipi I (Joan) made was in 1992, while we were still living in Florida – a 14’ tipi made to instructions sent me by Darry Wood, a master tipi maker. We used it for many years, going to the Earthskills workshops/Rivercane Rendezvous, PowWow’s, and Living History Pre-1840 Rendezvous. When we moved to North Carolina, to the same town where Darry lived, I was invited to look over his shoulder while he was sewing. When he chose to do fewer tipis, he graciously shared his patterns with me, and started sending customers my way. I have gotten many wonderful compliments on the quality of my work and comments on the joy of camping in a well made tipi.

I have been doing pottery since 1990, learning the basics at a pottery class of a community craft school in New Port Richey, Florida. When Tom and I moved to North Carolina, I found a used potter’s wheel and small kiln. Since we had moved within 7 miles of the John C Campbell Folk School, I was able to take classes with some of the visiting pottery instructors. The pattern work on my pottery was inspired by the wood fired pottery of the Southeastern Native Americans, ancestors of the historic Cherokee and Creek peoples, so for several years I sold the pottery at powwow’s, while also setting up a tipi to provide educational opportunities to visiting school children.  Lately the ancient pottery of Europe has influenced my patterns. My work has evolved as functional stoneware pottery with a combination of glazes that break and flow in blues and greens, over patterns inspired by ancient peoples. 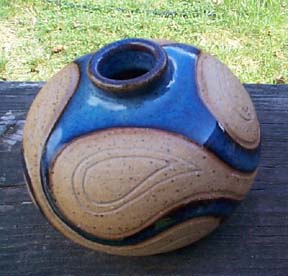 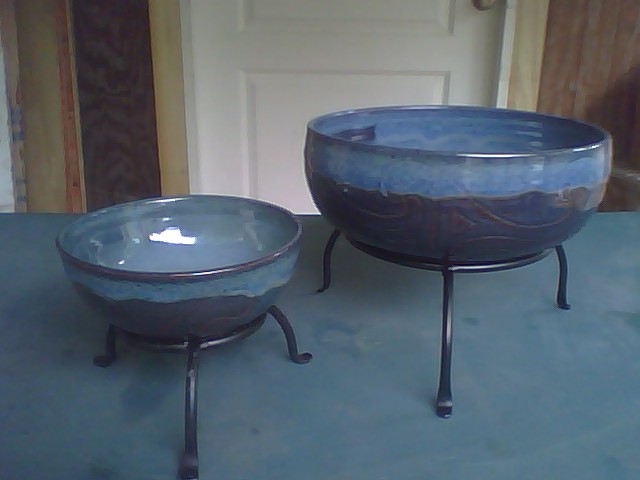 Tom will sometimes create stands of iron flowers and leaves for pottery I have incised with the same leaves and flowers. 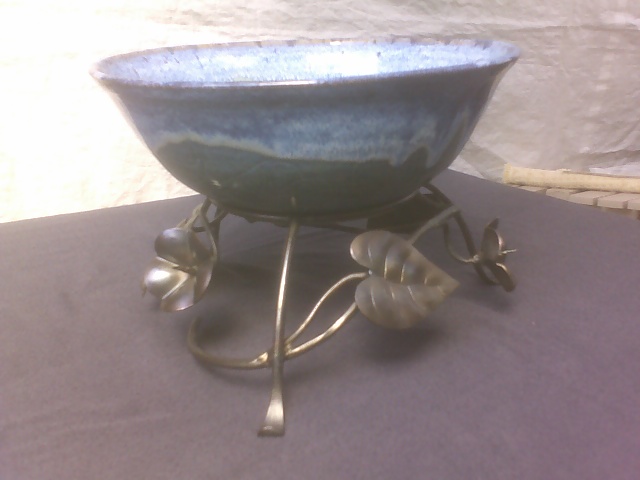 In Tom’s experience as machinist, industrial mechanic, and with tool and die work, he has worked metal in its most precision and technically advanced forms and has found that with just heat and a hammer working metal can be a form of artistic expression. His first experience with blacksmithing was around a campfire with a splitting mall for an anvil and a hand bellows about 30 years ago. Since then, he has taken numerous blacksmith classes at the J C Campbell Folk School and been active in the Alex Bealer Blacksmith Association of Atlanta, a large organization with many resources for anyone learning to be a blacksmith. He has a reputation among blacksmiths, jokingly, as a “garden variety” blacksmith, due to his preference for floral and flowing natural designs.

We now live in south central Kentucky, on the Little Barren River. We grow a big organic garden, heat with wood, & pull most of our water off the roof to a cistern.

We dream of creating a space for a blacksmith forge, a pottery studio, and canvas sewing room, where we can live sustainably in harmony with the land, and be able to offer workshops in sustainable living, primitive skills, and crafts that folks can use to build a living for themselves.

We’d love to hear from you!

Tom at the forge

At the Garden Show

my 15′ tipi at National PowWow

Tom at the anvil